There’s an idea from cognitive psychology called cognitive fluency that has been making the rounds in the business world lately. The idea is simple enough: as human beings, we prefer that which is easy for us to understand and process, and will find products and messages that are “easy” to grasp more desirable than those that are “challenging.” (See Convince with Simple Fonts.)

What does that mean? Companies that have easy-to-pronounce stock tickers actually have more successful IPOs. If I handed you and your best friend two sets of identically worded instructions to assemble the same product, yours written in Times New Roman, his in calligraphy, he would view the product as being more difficult to put together and likely less desirable as well.

Two different studies slated to be published in the August 2013 edition of the Journal of Consumer Research add fascinating depth to our understanding of cognitive fluency in advertising and how it can significantly affect product perceptions.

Order Counts: Past vs. Future 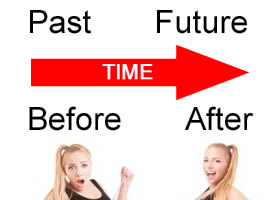 First, researchers from the University of British Columbia found that for certain products, something as simple as the placement of photos on a page (or web page) can dramatically affect how favorably the product is viewed. It turns out that in cultures where we read left to right, we have a spatial understanding of things on our left as being in the past, and things on the right as being in the future. So, researchers were able to show that when the product in question had an implied “time” component (home improvement products, etc.), consumers actually had a more favorable impression of the product when the ads they viewed had visual components that traveled from left to right across the page. The opposite was found true for people from cultures that read from right to left. Another study in the same issue expands upon another facet of how we perceive: when two things are presented as being close to each other, we perceive a relationship as existing between them, and the strength of the perceived relationship is related to how close the two things are. This insight has been translated into the advertising world. When it comes to products with a “before” and “after” (think acne medication), the spatial proximity of visual representations of cause and effect can influence customers’ perception of the product’s effectiveness. That is to say, the closer together you place the before and the after images, the greater causal relationship the viewer perceives, and the more effective they think your product is.

What is the neuromarketing takeaway here? The brain has evolved with a certain perceptual and psychological toolkit that dictates how we think, feel, and behave The better you align your marketing communications to how your consumer’s brain already works, the easier you’ll make it for them to focus on your brand and the better chance you’ll have to drive positive feelings about your product.

Pitch Anything by Oren Klaff