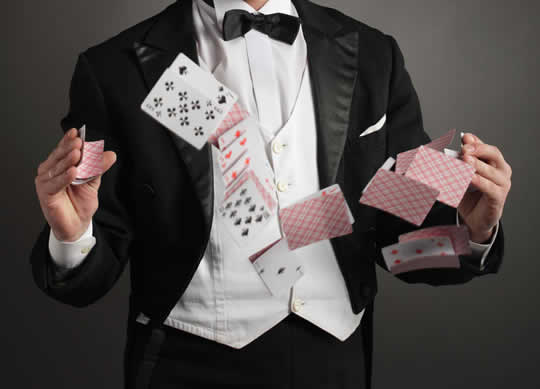 If you think that magicians and neuroscientists have little to talk about, you’d be wrong: both deal with issues like attention and consciousness, albeit in a different way. And, as it turns out, marketers can learn from both groups, and in particular, from understanding why magicians can fool us even when we are trying to pay attention.

Here are a few ways that magicians exploit our mental processes that can be used by marketers not to trick customers, but to better engage them and hold their attention:

1. People Focus on Only One Thing

I consider myself a multi-tasker, and no doubt most Neuromarketing readers would say the same about themselves. But the success of stage magicians show that we can only REALLY pay attention to one thing at a time. Many illusions are based on the magician showing you something with one hand while doing something you don’t notice with his other hand.

Neuroscientists compare our attention focus to shining a spotlight on something – we see what is lit, and lose focus on everything else. The term “tunnel vision” is particularly apt to how people focus on one small area at a time.

Marketers need to be sure they have their target’s attention where they want it. If the customer is distracted by something external, or worse, by something else the salesperson is doing (or that is happening in an advertisement), the key point of the pitch will be missed. Don’t let (or make) your customer multitask when you need his attention on your message!

Ever wonder why doves are such popular props with magicians? I’m sure their docile nature and willingness to tolerate being stuffed in a pocket are important, but the explosive burst of white, flapping wings as they fly off is guaranteed to draw every eyeball in the audience. The ability of the birds to hijack the viewers’ attention gives the performer a window of opportunity to set up the next stage of his illusion.

Our brains are wired to respond to motion – in prehistoric times, movement might be a threat, or perhaps food. Whether you are presenting to a group, selling one-on-one, or designing a TV commercial, use motion to grab the attention of your audience and focus it where you want it.

If you were watching a magician standing on the stage and he made a small, quick move to his pocket, you would certainly notice it. Magicians know that, and prevent you from seeing their small moves by distracting you with a big move – pulling a colorful scarf out using a sweeping gesture with their other hand. They know the audience will tune out the small move in favor of paying attention to the big one.

Particularly if you are dealing with an audience that may be distracted, use BIG motions to snap them to attention.

4. The Unexpected Attracts Us

When I watch a magician, I’m always trying to pay close attention to spot any shady moves. So is the rest of the audience. It’s rare to spot a skilled magician’s tricks, though, not just because of the distraction techniques described above but also because he is disguising some moves as “expected” actions. For example, if he scratches his ear, shoots his cuffs, or makes another move we are familiar with, our brains tune it out as expected and uninteresting. That move may well mask a transfer of a prop or some other preparation step. On the other hand, if he placed his palm on top of his head or raised his left arm for no apparent reason, we’d all be watching carefully.

Much as our brains focus on motion, they also focus on novelty. Surprising your customer with an unexpected move, a novel sound, or unfamiliar image will get her to look at and analyze what she is seeing. That’s true even with text – “New!” is one of the most attention-getting words in advertising (See The Power of New!).

One reason we don’t notice when a magician scratches his nose but slyly palms a coin that was hidden in his mouth at the same time is that we KNOW what it feels like to scratch our nose. When he is performing that action, if we notice at all, our mirror neurons are lighting up as if duplicating that action ourselves. Magicians exploit this phenomenon with “decoy actions” – appearing to take a drink, for example, but really passing an item from mouth to hand in the process. Our brains aid the deception by playing along with the decoy activity.

Even though marketers aren’t normally trying to disguise sneaky actions, there is a lesson here. When people see someone performing a familiar action, either in person or by video, their brains will engage as their mirror neurons kick in. Selling soft drinks? Let people experience opening the bottle, raising it to their lips, and taking a drink. Magicians know how familiar physical actions engage our brain, and you should too.

If you’ve ever been to a magic show, either on a stage or close-up, you know that the magician often keeps talking. Good magicians will talk about what they are doing, why it is difficult, and so on, while their hands are busy with the trick. Their purpose, of course, is not to give you real information about their technique but rather to distract you. In essence, the magician’s patter is another stream of information for your brain to process, and the overload makes it less likely that you will spot what is really happening.

While a stream of chatter serves the magician’s purposes, excessive verbiage may distract your customers from your selling points. Have you ever had a salesperson who wouldn’t shut up while you were examining a product? It’s hard to look at, say, a car’s control panel while a salesperson is spouting a stream of inane babble. Salespeople should be trained not just what to say, but when to say it. And when not to. And in other media, like commercials, be aware that the voiceover shouldn’t conflict with important information on the screen.

Death by Bullets. Even Powerpoint jockeys can learn from magicians’ patter – lengthy text bullets in a presentation are a perfect example of distraction. Trying to read the text while the speaker is making the same point verbally causes low comprehension and recall because the brain is too distracted to do a good job with either task.

Magic has likely been around in some form at least as long as marketing, and we marketers would do well to learn from its practitioners! (Note – some of the content in this post is based on information from Sleights of Mind: What the Neuroscience of Magic Reveals about Our Everyday Deceptions

Emotional Contagion and Beyond